In Singapore and Malaysia, onde-onde refers to glutinous rice balls dessert. Its pandan flavoured skin wraps semi-melted palm sugar that would burst upon the first bite. Each onde-onde is coated with fresh shredded coconut. Get all the tips to make this traditional dessert.

In Malaysia and Singapore, onde-onde is referred to these delicious glutinous rice balls filled with gula melaka (palm sugar). As you bite into an Onde-Onde, the melted palm sugar flows out. I likened them to sweet little bombs as the sweetness explodes in the mouth. The slightly salted shredded coconut further enhances the deliciousness of this 'kuih'. While there are many varieties of delicious kuih in the region, onde-onde remains on the top of my list. Our friends in Indonesia call it ‘klepon’.

Pandan extract can be bought at supermarkets or Asian grocers. It can also be made using fresh pandan leaves. Just blend 7 blades of pandan leaves with 60 ml of water. You may refer to the video of kaya to see how it is prepared.

Using only glutinous rice flour would make onde-onde rather soft although some do enjoy such consistency. In this recipe, tapioca flour is added to the dough to make it slightly firmer. You may substitute tapioca flour with corn flour.

Where to get grated coconut?

Use freshly grated coconut if you can get hold of it. Frozen shredded coconut can be found at some Asian grocers. 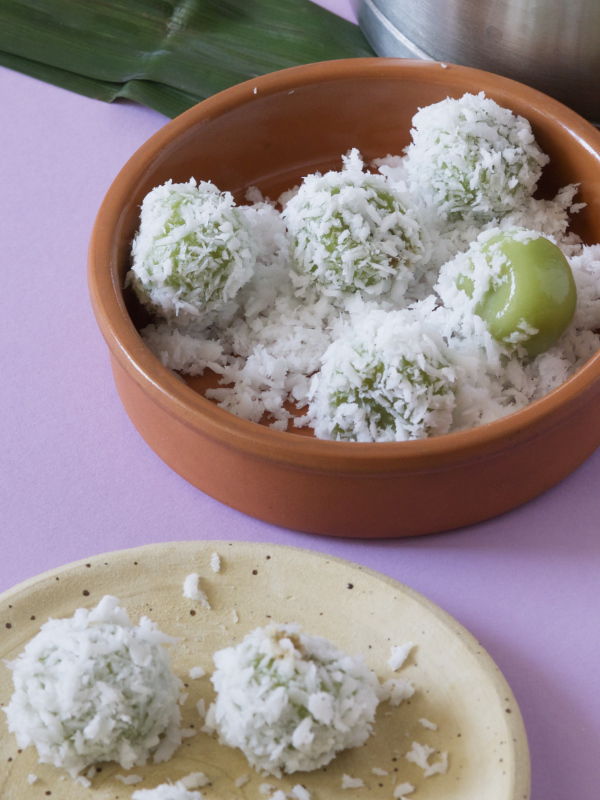 Can I use brown sugar or other sweeteners as the filling?

That would change the taste of onde onde tremendously. The amazing taste of onde-onde comes from the 'gula melaka', a special palm sugar which has a toffee taste to it. Pure gula melaka which is softer can be chopped and shaped into balls easily. It has a darker appearance compared to other types of palm sugar.

Why does the dough crack?

The dough is too dry. Add some water and knead the dough again. Work in batches and store dough in a bowl with a piece of damp cloth over it to prevent it from getting dry. 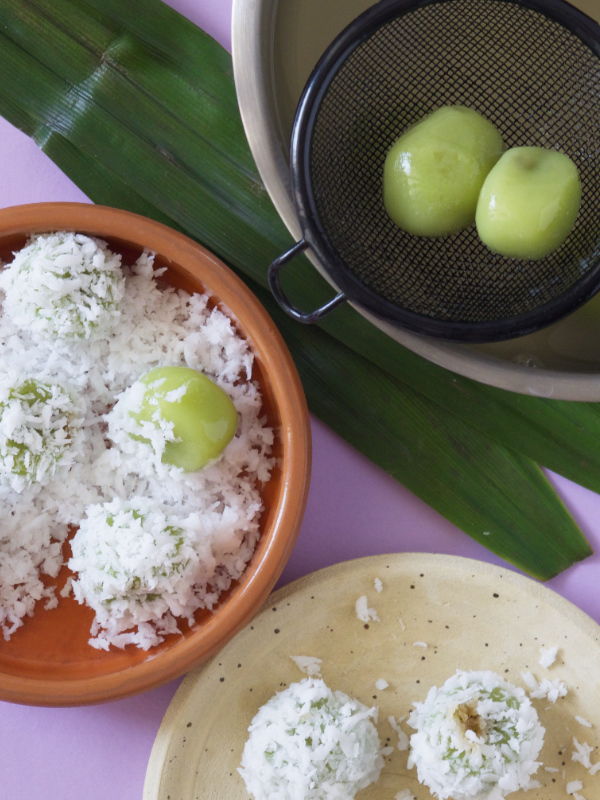 Why did the palm sugar not melt?

The onde-onde were not cooked long enough. I always simmer them over low heat for another 5 to 10 minutes to ensure that the palm sugar has fully melted. The other reason may be due to the quality of the palm sugar. While original gula melaka is very easily shaped and cut, most gula melaka found in the market has plain sugar added to them. This makes them very hard. So, if the chunks of gula melaka are too large, they may not melt so quickly. The trick is to shave the palm sugar with a knife or mandoline or simply chop them into small chunks. This way, they would melt faster.

How long can onde-onde last?

Add water and salt to the desiccated coconut. Mix well and steam the mixture for 15 to 20 minutes.

Divide the dough into 14 little balls. Flatten dough and wrap chunks of 5g palm sugar in it. Be careful that the dough is not too thin as it will expand during the cooking process. This will result in the dough cracking and the palm sugar flowing out.

Put the little balls of filled dough into a pot of boiling water. Dish it out once they float or leave to boil for a further 5 to 10 minutes to allow the palm sugar to melt thoroughly.

Coat 'onde-onde' with the steamed desiccated coconut. Leave to cool and enjoy!

Hi, may I know how many balls of onde-onde are there in one serving?

Hi Grace :) Per serving is 3 balls.. but your video shows 9 balls.. so how many dough did you use for this recipe ? 3 servings dough rite ?

We didn't increase the amount here. The Onde-Onde in the video is rather big and not all were shown in the small screen. This refers to the typical size of Onde-Onde sold out there.

Hi Grace :) I am using Freshly Grated Coconut which is easily found here where I lived. Do I still need to steam the coconut with salt ? Or is it only applies to Desiccated Coconut?

Hello Claire. Steaming only applies to desiccated coconut because we want it to be fluffier/softer.