Roasted chicken rice is a favourite among the locals in Malaysia and Singapore. The meat is juicy while the crispy golden-brown skin is smooth and tender with a light hint of sweetness. A delicious dish to have at any time of the day.

Roasted chicken rice may be widely found at food stalls and restaurants alike as it is a favourite dish among the locals. The scrumptious roasted chicken is served with fragrant rice cooked with chicken oil and lots of aromatics like ginger and shallots. Despite being a rice dish, it is enjoyed for breakfast, brunch and even dinner. This proves its deliciousness and popularity. Before we get into the details of the recipe, there's a fact to be straightened first.

The biggest misunderstanding about the dish

Many may not have guessed but the ‘roasted’ chicken is actually fried! The dish may not deliver the crunch you’d expect of fried chicken as it is fried with a 2 step technique which makes the skin smooth and tastes honey-like. In fact, I love this more than the boiled version, the Hainanese chicken rice which is much easier to prepare.

Can I bake the chicken pieces instead?

Of course! That would save you from lots of cleaning up but personally, I feel frying makes the skin browns quicker and is tastier. Baking the chicken takes a long time for the skin to turn brown. Besides, it might pose a problem as the chicken has to be boiled before being baked. Leaving it in the oven for a long time causes the chicken to be overcooked and results in the meat being dry.

Never boil chicken for too long

This brings me to the next point. When cooking the chicken thighs (step 3), do not over-boil. Remove the chicken immediately once the water begins to boil. Don't worry about under-cooking it as it would be fried later on.

The vinegar mixture is crucial for the appearance, crispy texture and flavour of the skin. While the chicken thighs are still hot, dip them into the vinegar mixture. Do not wait until the chicken cools down as the pores on the skin would not be able to effectively absorb the mixture then. Vinegar also helps in tenderizing the meat.

Maltose is required in the vinegar mixture. You may replace it with honey to replicate the sweetness. However, it will not be able to provide one of the core purposes of maltose which is to make the skin crispy. It’s obvious from the natural consistency of maltose as it is much thicker than honey. This is the secret used by most Chinese restaurants if you’d ever wondered how the ‘roasted’ chicken skin is always light and crispy.

In this recipe, it is recommended to use two chicken thighs. If you prefer to use a whole chicken, simply double the amount of ingredients mentioned in the recipe except for the vinegar mixture as it is enough to be used for a whole chicken.

Unfortunately, there is no non-alcoholic substitute for Shaoxing wine which is added for its sweetness. While most suggested using apple juice as a substitute, I would highly advise against it as it will spoil the taste of the dish making it slightly tart.

Leave chicken pieces out on the counter to allow it to dry for at least 3 hours. Either use a baking rack or place a saucer on a plate to lift the chicken to allow better draining. 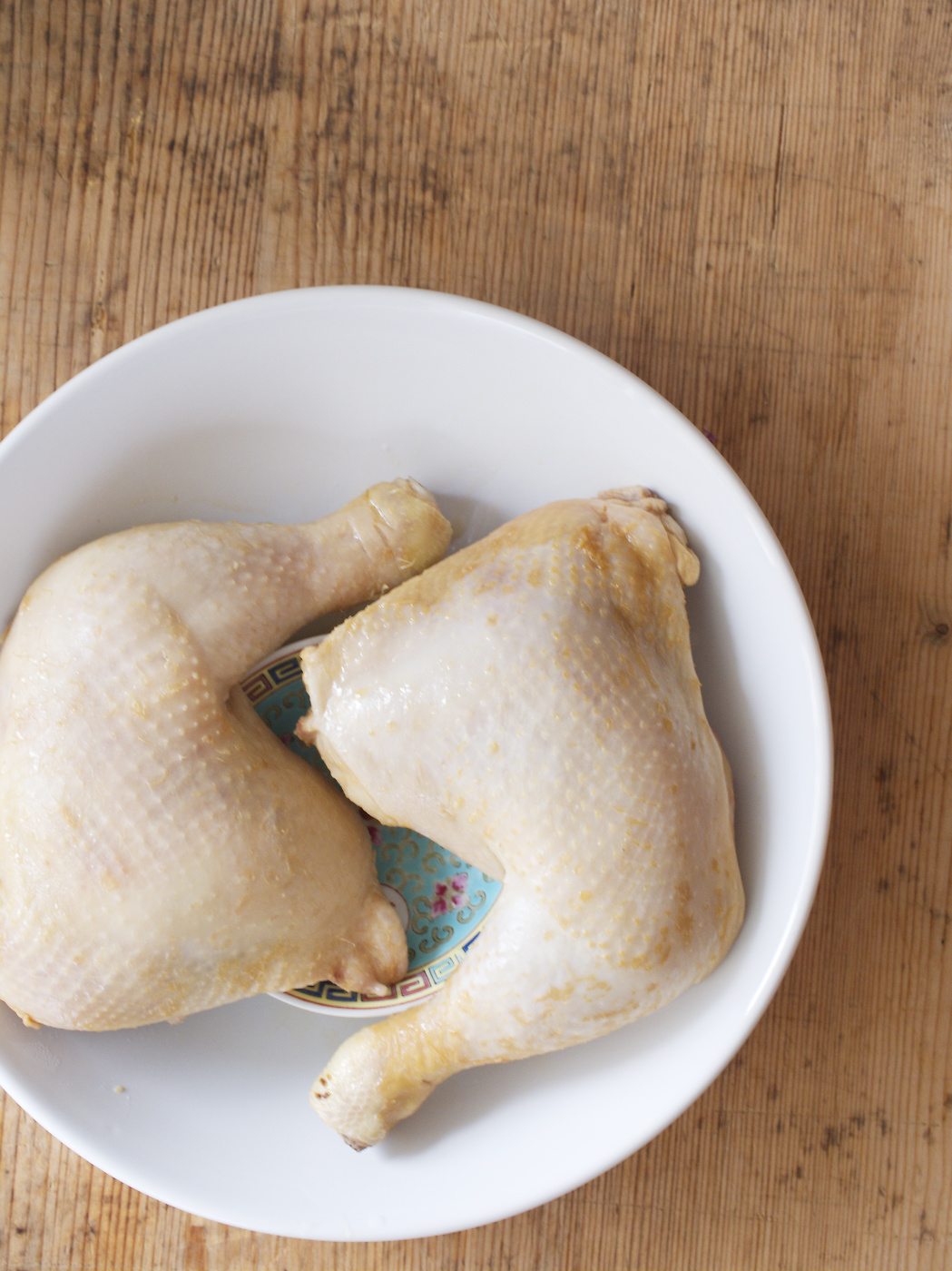 For extra precaution, use some kitchen paper to pat dry any excess water. Otherwise, oil may splatter during the frying process. It is advisable to use a splatter screen for protection.

Frying chicken at a lower temperature initially will help to prevent the sudden popping of moisture trapped in the chicken fats which may result in oil splattering. Therefore, start with a lower temperature of 130 C/ 265 F and increase the heat to 176 C/350 F as the frying progress.

The soup is one of the key side dishes to a complete chicken rice meal. Since the chicken broth is mildly flavoured, I'd suggest adding a drumstick along with other ingredients like radish or carrots to the broth and allow it to simmer for at least 45 minutes. This will enhance the sweetness of the soup. Adding a dash of white pepper and salt would make it tastier.

For this dish, the usual soy sauce mix and chilli sauce are served together. These sauces are the same as those in the Hainanese chicken rice recipe. The salty sauce is a mix of soy sauce, sesame oil, Shaoxing wine, sugar and chicken broth. As for the chilli sauce, it uses a blend of chillies and aromatics that are the mixed with chicken broth.

A plate of delicious chicken rice is so satisfying especially when the skin is done perfectly.

Render chicken skin for its oil at low heat. Then, remove chicken skin and sauté sliced shallots, minced ginger, minced garlic and lemongrass until fragrant. Add rice and the broth from Step 2. Stir in salt. Bring to boil. Once it begins boiling, reduce heat and simmer until rice is cooked.

Grace, is there an extra 0 for the cooking and preparation time?

I see what Grace just did there. ;) Just checked with her and updated the time. I'd be too hungry to 1.5 days to just prepare the chicken.

Thank you, Grace, for the additional tips on cooking a good dish. Will definitely use this recipe soon if not this week!

Looking forward to a food snap ;) Be careful when frying, alright.

Would have cooked this dish as all the pantry staples were available but missing the maltose. The western supermarkets do not stock maltose so will have to seek out an Asian one that does have it in stock. Is yours a Chinese brand?

It's rare to find western supermarkets selling maltose since it is a more common ingredient in Asian grocers. You can substitute with honey as suggested. Good luck, Susan!

Hi, thankss so much for this recipe!!! Can't imagine that it is that easy to make~~~ However, I think a video for this recipe is not yet available, so there are some question I wanna ask~ 1) The vinegar use have to be black or white~? (From this picture, it looks white) 2) Is deep frying better or shallow frying? I always make hainanese chicken rice using your recipe~~ Deliciousssss Thanks (v ^ _ ^ )v

Welcome, do give it a try and upload a food snap! Regarding the vinegar, it's white vinegar. You can also use Chinese red vinegar. Of course, you can deep fry the chicken but I prefer to shallow fry, as there is less oil and it's easier to control.

I gave a try yesterday, and it's not photogenic >_< (turns out kinda burnt on both side even though I use only medium low heat) Will try again and upload if it looks like yours hahaha !

Oh no! Don't worry. Keep trying. I'm sure you will do better the next time. I do hope it tasted great.

What’s raw chilli sauce? Can I just pound the red chilli and add some salt to it?

You can find the information in the background section under "chicken rice sauces". Here is the link to the chilli sauce recipe https://www.nyonyacooking.com/recipes/chilli-garlic-sauce~ByZzdvowz5Z7

After opening the tub of maltose, I found that I needed to use force to get 3 tbsp of it out as it was rock solid. Is there an easier way of removing the maltose from the container? How long is the chicken meant to soak in the vinegar solution? I had the chicken in there for about 10 mins. Cooking the dish this evening for dinner...yay!

Place the maltose in a warm oven (about 30C/85F). That will soften the maltose. You don't need to soak the chicken in the vinegar solution for a long time. Just a minute or so. Hope to see your food snap soon!

Thank you, Mira. Instead of the oven, can the microwave oven be used? The maltose container is plastic so wondering whether microwaving is an option. Although the recipe calls for the poached chicken to be removed from the liquid the moment it starts to boil, I found that because the chicken was barely cooked, it had the flow on effect of it not being thoroughly cooked when it had already turned a deep brown while being shallow fried. I think it needs to be left in the poaching liquid a bit longer. Regrettably the chicken didn’t look snap worthy so I shall have to try it a second time😫

Hey Susan, of course. Maltose can be soften in the microwave too. Leave it in there for about 30 seconds. As for the chicken, it is meant to be fully cooked during frying. As recommended in the background section, it's best to fry the chicken at 130 C first and increase the heat as you progress. The whole frying process took ca. 20 minutes. Hopefully, you'll have better success the next time!