Pumpkin barley dessert is popular among the Chinese community. Made with fresh steamed pumpkin puree, this simple nutritious recipe is light, easy to consume after a heavy meal and extremely delicious.

Pumpkin barley dessert is a type of sweet soup originating from the Chinese culture, specifically, the Cantonese community. In Cantonese, these soups are known as ‘tong sui’ which literally means ‘sugar water’. Despite being called ‘sugar water’, these desserts are actually rather mild in sweetness compared to most Western desserts. Usually, they rely on the natural sweetness of the ingredients used and in this case, pumpkin contributes sweetness to the dessert.

Pumpkin is known to be a fantastic source of vitamin A and is high in anti-oxidants too. Barley, on the other hand is an ancient grain which is known for its multiple health benefits, one of which is its high content of fiber that helps lower cholesterol.

Hate is a harsh word but have you tried the combination of pumpkin and coconut milk? I can assure you the taste is heavenly! It's nothing like pumpkin pie, pumpkin muffins or fresh pumpkin. Additionally, the texture of the soup is so smooth that you won't chew into chunks of pumpkin. Be adventurous and give it a try. This is a great way to incorporate pumpkin into a dish for those who are not fans of pumpkins.

What type of pumpkin to use?

Just like the pumpkin loaf recipe, sugar pumpkin is the best option. They are also known as pie pumpkins or ‘labu kuning’ in Malay. In fact, this type of pumpkin is the best for making desserts as they are naturally sweet. However, check to see if there are any rotten or soft spots before purchasing.

Of course, you can use frozen pumpkin if fresh ones aren't available. Thaw them before using and continue with the steaming process as per recipe.

Steaming pumpkin to make it into a puree is very simple. Simply put some water in a pan and place a heavy ceramic bowl filled with chopped pumpkin into it. Cover with the lid and wait till it's cooked. It's important to note that the size of the chopped pumpkin decides the duration of time needed to steam them. Cutting them into smaller chunks and steaming on a larger surface will lessen the time of the cooking process.

You may boil the pumpkin together with the barley instead of steaming it. However, there may be traces of pumpkin chunks. This is not ideal for those who are not fans of pumpkin.

Be cautious with the heat

Cooking the dessert over high heat will risk having the natural fat in the coconut separates. Should that happens, the dessert will be very oily and looks unappetizing. Therefore, add coconut milk towards the end of the cooking process to enjoy its creaminess in the dessert.

Natural sweetness from the pumpkin and candied winter melon is sufficient as sweetener if you like to keep it light. For a healthier option, you can add Chinese brown sugar as it is full of nutrients due to its method of processing. It is the concentrated form of sugarcane juice extract without going through any refining process. Hence, all vitamins are kept intact.

If candied winter melon isn't available, simply substitute it with the sugar of your choice.

Tong sui is most commonly served warm. Anyway, it's entirely up to you. Some do not enjoy warm desserts. So, cool it in the refrigerator to desired temperature. If there is any leftover, refrigerate it to be taken the next day. The consistency will be slightly thicker then due to the starchiness of the barley.

This dessert can be kept chilled for up to 4 days. However, it is best not to add coconut milk to the dessert if you plan to make it in advance. Coconut milk goes bad easily. Just add it shortly before consumption. 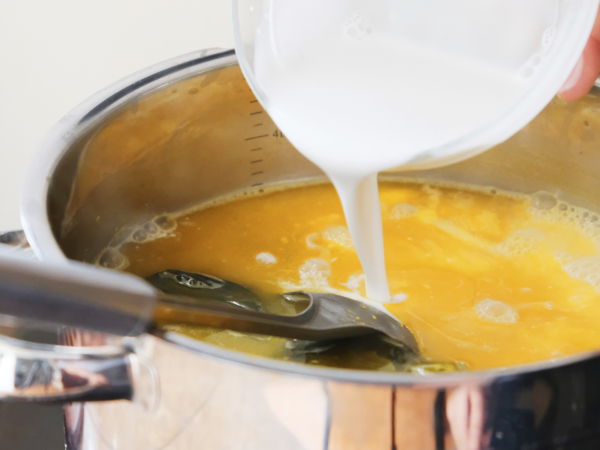 You can also freeze the dessert for up to 3 months. The flavour will decline if kept any longer. Do not add coconut milk in the dessert meant for freezing as it may split after defrosting. Anyway, coconut milk tastes the best when added shortly before serving.

Skin the pumpkin and cut them into cubes before steaming. Steam pumpkin for 15 minutes or until soft.

While the pumpkin is steaming, rinse the barley and pandan leaves. Set aside and move on to chopping the candied winter melon into small pieces.

Fill a pot with water and add the rinsed barley, candied melon and pandan strips. Boil for at least 30 mins or till barley is softer.

Once the pumpkin is totally soft, mash them with a fork and add into the pot. Boil for another 5 minutes. Turn off the flame and stir in the coconut milk.

Thank you Nyonya Cooking for recipe. Really delicious – above par!