Home Magazine All About Kueh Guide

All About Kueh Guide

Kue, kueh or kuih are traditional sweet or savoury cakes. These bite-sized colourful snacks are usually made with rice flour and coconut milk. Whether steamed, baked, fried or boiled, they are mostly gluten-free or vegan. Learn about the origins, varieties and superstitions here.

When we see the word dessert, we immediately think about ice cream, pastries and cakes. There is a whole hidden world of desserts in the Southeast Asian cuisine, and this time, we’ll delve into the world of kueh which can be traced back to the 15th century. It can be spelled in three different ways: kueh, kue, kuih. As someone who was brought up in a Hokkien household (although I’m actually Hainanese by ancestry), I’m more familiar with the spelling kueh. For the purpose of this article, we will use the spelling of kueh.

The origins of the word ‘kueh’

In fact, the word ‘kueh’ comes from the Chinese character 粿 which is pronounced as koé in Hokkien. That is phonetically similar to how it is commonly known, kueh. In Indonesia and Malaysia, kueh is spelled as kue and kuih respectively. 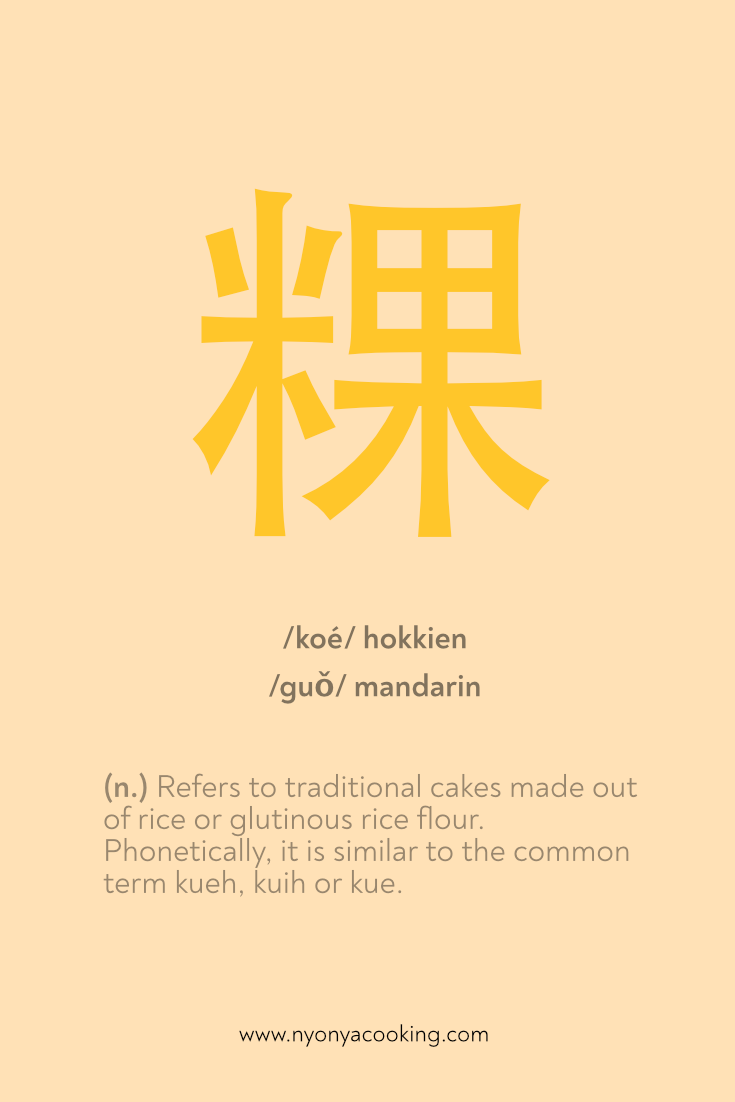 The Chinese character 粿 (Mandarin: guǒ) also means rice cake and it indicates that kueh is typically made from glutinous rice. In reality, kueh is a broad term that can refer to cakes, cookies, dumplings, pudding, biscuits, pastries. While it is mostly found in Indonesia, Brunei, Malaysia, Singapore, you can also find similar versions in Vietnam, Thailand and Myanmar. 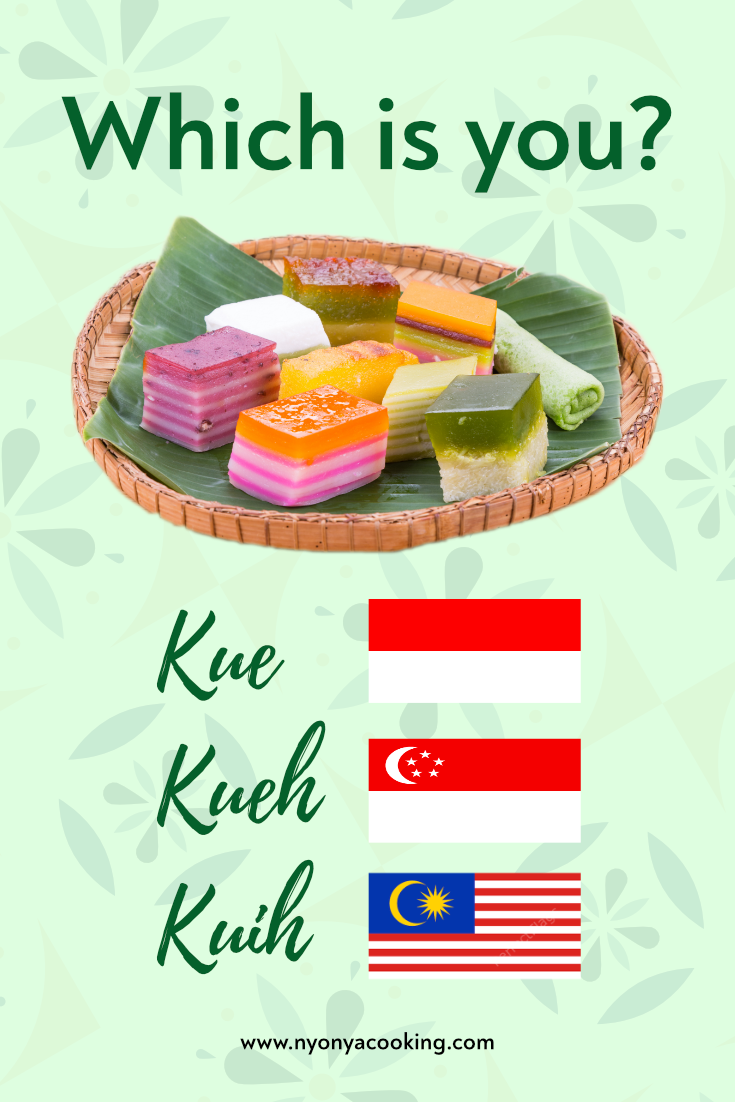 Kueh is not really confined to a particular meal as one can snack on it throughout the day. They usually come in bite-sized form and are either sweet or savoury. They are also generally inexpensive and very affordable.

The wagashi of Southeast Asia

Japan may be known for its intricate selections of sweets known as wagashi. We on the other hand have kueh which equally require precision and care to make.

Traditional kueh recipes are usually passed down from one generation to the next and are usually homemade rather than in factories. In a world where industrialization is at an all time high, traditional kueh are having a hard time staying relevant. As such, it is important to preserve such traditional foods.

However, it has been proven difficult to do so due to globalization where youth these days are more exposed to mass media and are heavily influenced to emulate their Western counterparts.They are less concerned and not interested in learning about preserving the art of making traditional kueh.

How are kueh different from Western cakes?

One key difference is that kueh generally uses glutinous rice as a key ingredient. The consistency of kueh is usually chewy and soft, and there is a bouncy texture to it. It is usually sweet, but kueh can also be savoury.

Kueh is unique to the Southeast Asian cuisine and it is something everyone should try because it is a traditional food. Not only that, the way it is made is so vastly different from that of the Western pastries and desserts. It is definitely worth a try and you might even fall in love with it!

What is Nyonya or Malay kueh?

The various methods to making kueh

One of the methods to make kueh is by steaming them. There are many recipes that require steaming but I’ll just talk about one famous kueh that everyone would know: Kueh Bakul or 年糕 (niangao), a sticky sweet snack. Traditional kueh bakul must be steamed in a constant heat for at least 10 hours until the mixture of sugar, glutinous rice flour and water caramalizes. Baking is a more common method for preparing most types of dessert. One common snack that is made by baking is kueh bahulu. I remember eating these for my breakfast in primary school. They are a little similar to madeleines (also a common breakfast snack for me) in texture and have a crispy exterior. It is usually served during Eid al-Fitr and Chinese New Year.

Another example of kueh made by baking is kueh bangkit, which is a type of cookie. It is actually one of my favourite snacks that I look forward to eating during Chinese New Year. Unlike most cookies, this one just melts in your mouth and you can feel the explosion of coconut sweetness and you’d find yourself reaching for more. It is a common snack in Eid al-Fitr as well.

As mentioned, kueh can also be savoury so don’t be surprised to see frying as a method here! In Malaysia, kueh bakul is fried with taro or sweet potato. Another type of kueh that is made by the frying method is cekodok (aka jemput-jemput), a traditional Malay fritters snack that is common in Malaysia, Brunei and Singapore. This is another pastry that was a common snack during my childhood. The more common fritters that I’ve encountered are fried bananas (aka pisang goreng) or jackfruit (cempedak goreng). Another kueh made by frying is kueh siput, a savoury snack that has a good crunch to it. It looks like a type of Italian pasta known as gnocchi but is mildly spiced. Kueh siput is quite popular during the festive seasons as well.

By now, you must have realized that there are many different ways to making kueh. Apam Balik is one type of kueh that is pan fried. Also known as Min Jian Kueh, it is similar to pancakes. However, it is thicker and has the perfect balance of sweetness and savouriness. Although, it is believed to have originated from China, you can find this in Indonesia (martabak), Malaysia, Singapore, Hong Kong, and Taiwan. Apam Balik is usually filled with butter, peanuts and corn but chocolate and cheddar cheese is a modern twist to the traditional Apam Balik.

Dodol, a sweet toffee-like snack originated from Indonesia and is now a common snack in Southeast Asia. Just like kueh bakul which is steamed, dodol is also made with three ingredients namely, glutinous rice flour, palm sugar and coconut milk. The mixture is heated up at low temperature and stirred for hours until it caramelizes. This can go on for 12 hours!

It takes a lot of effort to make dodol and that’s why it is usually only served during festive seasons in Indonesia and Malaysia. However, you can also find similar versions of dodol in Singapore, Brunei, Philippines, South India, Sri Lanka, Thailand and Burma. Lempuk or durian cake is another similar kueh which uses the slow-cooking method. It is not toffee like, does not consist of coconut milk, is less sticky but also really sweet. They are available at most Asian grocers, if you’d like to give durian cake a try.

Also a popular cooking method to make kueh is by boiling and I’m featuring my favourite dessert ever - Kueh Ee or glutinous rice balls or 湯圓 (tangyuan). I remember buying those ready-made to eat frozen glutinous rice balls from the supermarket and boiling them so I can eat them just like that.

Usually, families get together to make Kueh Ee so as it symbolises unity. While it can be eaten plain, it can also be filled with peanuts, red bean, matcha or yam. It is usually served in peanut soup or ginger soup, but I usually like mine with almond paste.

Since kueh is such a speciality in preparation and appearance, it is to no surprise that it requires unique moulds instead of the usual cake pan or cookie cutter. Traditionally, kueh moulds are usually made of wood or brass. Of course, not every kuih will require a special mould. Some kuih like the curry puff can be done with simple rolling and folding of dough. Other kueh will require moulds that are usually found in local baking stores. 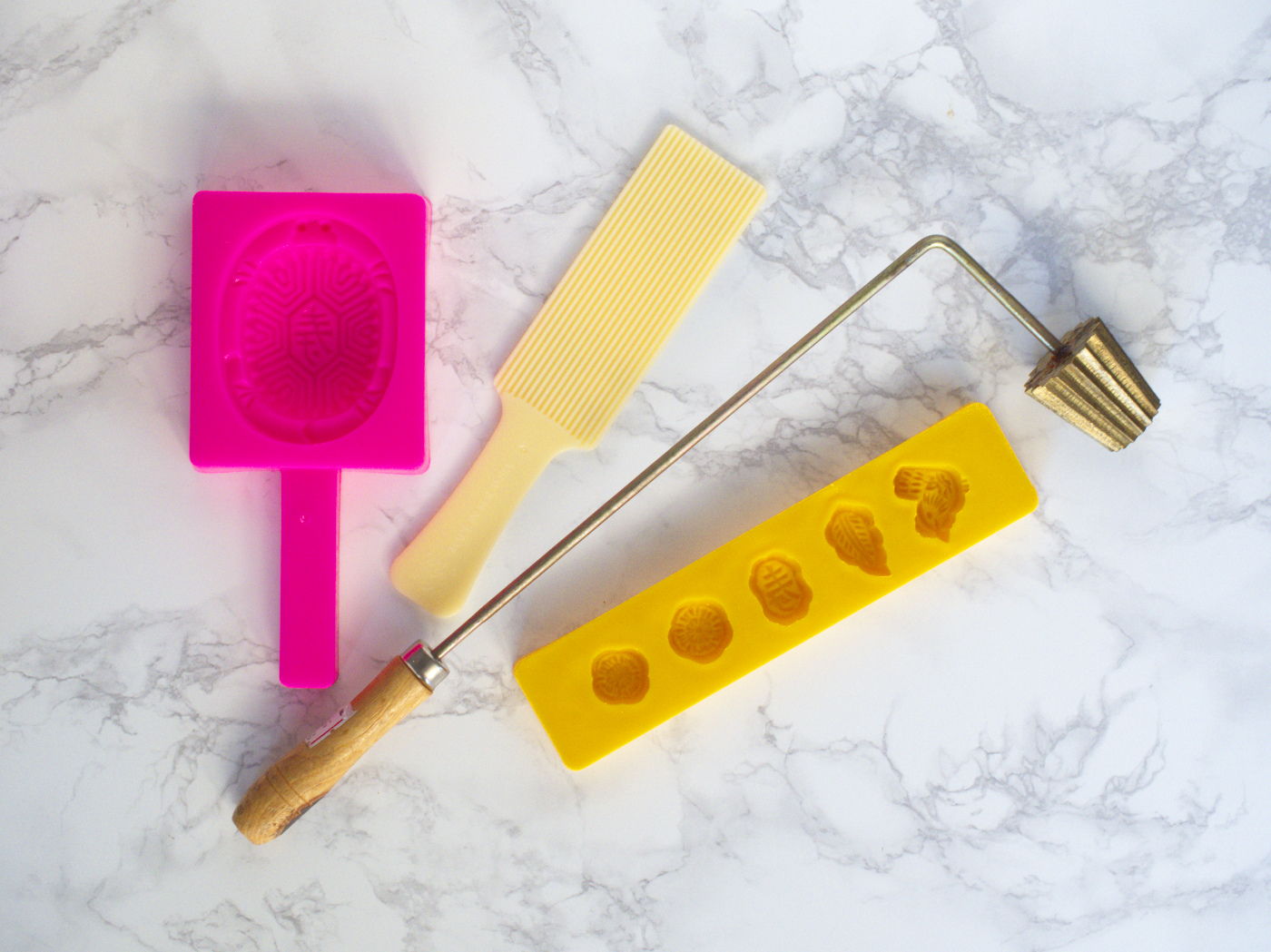 The colourful and laborious kueh are often made to celebrate religious or cultural occasions such as Eid al-Fitr, Deepavali or Chinese New Year. Some kueh carry more significance over the others on certain commemoration days. For example, Kueh Ee which are glutinous rice balls symbolizes family unity. Hence, they are usually eaten during Chinese weddings, Chinese New Year, the Lantern Festival, and even birthdays.

Kueh Bakul or nian gao which translates to ‘year cake’ in Mandarin and it is the most popular around Chinese New Year. It is considered good luck to eat nian gao on Chinese New Year because it is a homonym for higher year or prosperous year.

For the Hindu community, murukku, a spiraled deep fried snack is considered as kuih and it is a must during Deepavali. You’ll find an assortment of this savoury snack in most homes celebrating the festival of lights on this day.

Superstitions and traditions come hand in hand, and here are some taboos in kueh making. For Kueh Bakul, no one is supposed to see the person making them and there should not be any unnecessary questions or comments to be made. An entire batch of Kueh Bakul can be discarded if the baker does not adhere to the superstitions. This is because Kueh Bakul usually used for prayers. Therefore, a woman who is menstruating cannot make Kueh Bakul as she might spoil the outcome of the kueh.

Generally, negative comments are not welcomed when kueh are in the making. The combination of rice, tea leaves and salt is usually kept around the kitchen to ward off negative effects of the superstitions.

Where to find kueh?

You can obviously find it in Singapore, Malaysia, and Indonesia as they are more commonly the producers of traditional kueh. They can be bought in either speciality food stores, food courts, restaurants or roadside food vendors.

If you are living away from the region, you can try your luck looking for kueh in Asian supermarkets or restaurants. For Singaporeans, definitely visit the Tiong Bahru market as it is famous for the bakeries. Just this morning, I visited the market and got myself a delicious Ang Ku Kueh. 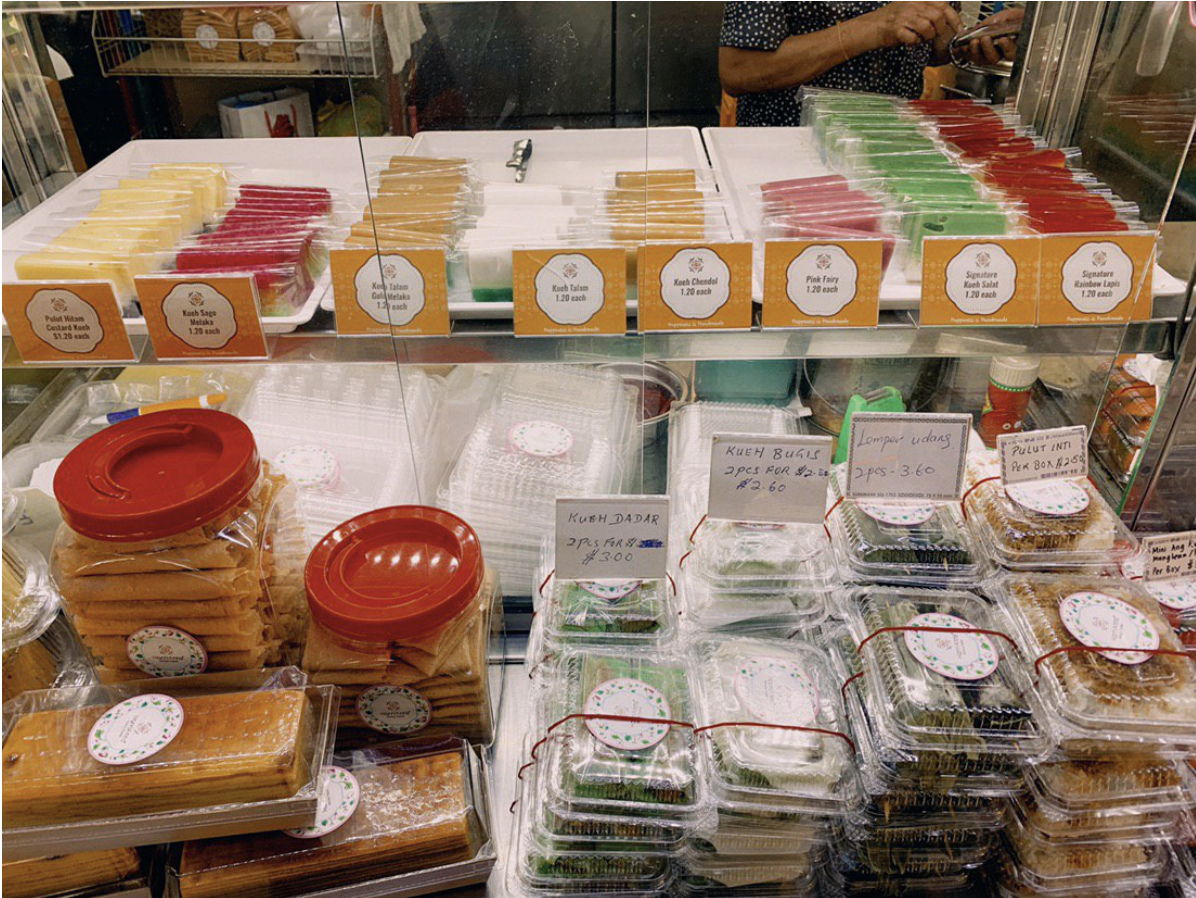 As you can see, they are not very pricey and you can almost get it anywhere. If you want to try making your own recipes, we have some tried and tested recipes for you here. Have fun making them!