'Roti canai' or 'roti prata' is a flatbread of Indian origin and is extremely loved in countries like Malaysia and Singapore. Usually eaten with dhal curry, fish or chicken curry, it is sometimes served sweet with condensed milk, bananas or even chocolate cream.

Roti canai is like the Southeast Asian flat croissant. It is rather similar due to the flakiness of the layers of oiled dough. With a combination of flour, water, salt and oil, no one would have guessed that this flatbread which is also known as roti pratha or roti prata could be so delicious. In this simple recipe, you will learn how to make authentic roti canai any time in the comfort of your home.

I have practiced making roti canai multiple times. I must admit it was a mess when I initially started. However, practice makes perfect and I definitely improved over time. Unfortunately, there is no shortcut to creating this flaky and crispy flat bread. Anyhow, it is fun flexing the muscles while flipping the dough.

In Malaysia or Singapore, roti canai is made using all-purpose wheat flour packed as ‘tepung gandum serbaguna’. This type of generic wheat flour is used for making cakes, cookies and sometimes bread. Do note that bread in Asia is very soft unlike those in the Western countries.

In most Western countries, this type of wheat flour is marketed for making cookies and cakes as it has a lower gluten content compared to bread flour. Bread flour is higher in gluten content which helps in stretching the dough but it will cause the roti canai to taste more like bread instead. Here is a guide to the type of flour which should be used for roti canai if you're in other countries.

I've made roti canai several times using the 405 flour sold in Germany and it always turn out perfectly well.

Oil is essential for roti canai

It does require a lot of oil to make roti canai in order to create the layers of flaky and moist dough. When less oil is used, the dough will be hard and dry. Begin with dipping your hands in some oil or have a generous amount of oil on your palms.

How long does it take to knead the dough?

The dough does not need to be kneaded for a long time. As long as the dough comes together, you should stop kneading and separate them into 6 portions. This should take ca. 5-7 minutes.

Over-kneading the dough will damage the structure of gluten molecules. When that happens, you won't be able to stretch the dough and it will break instead. This is how it will look like: 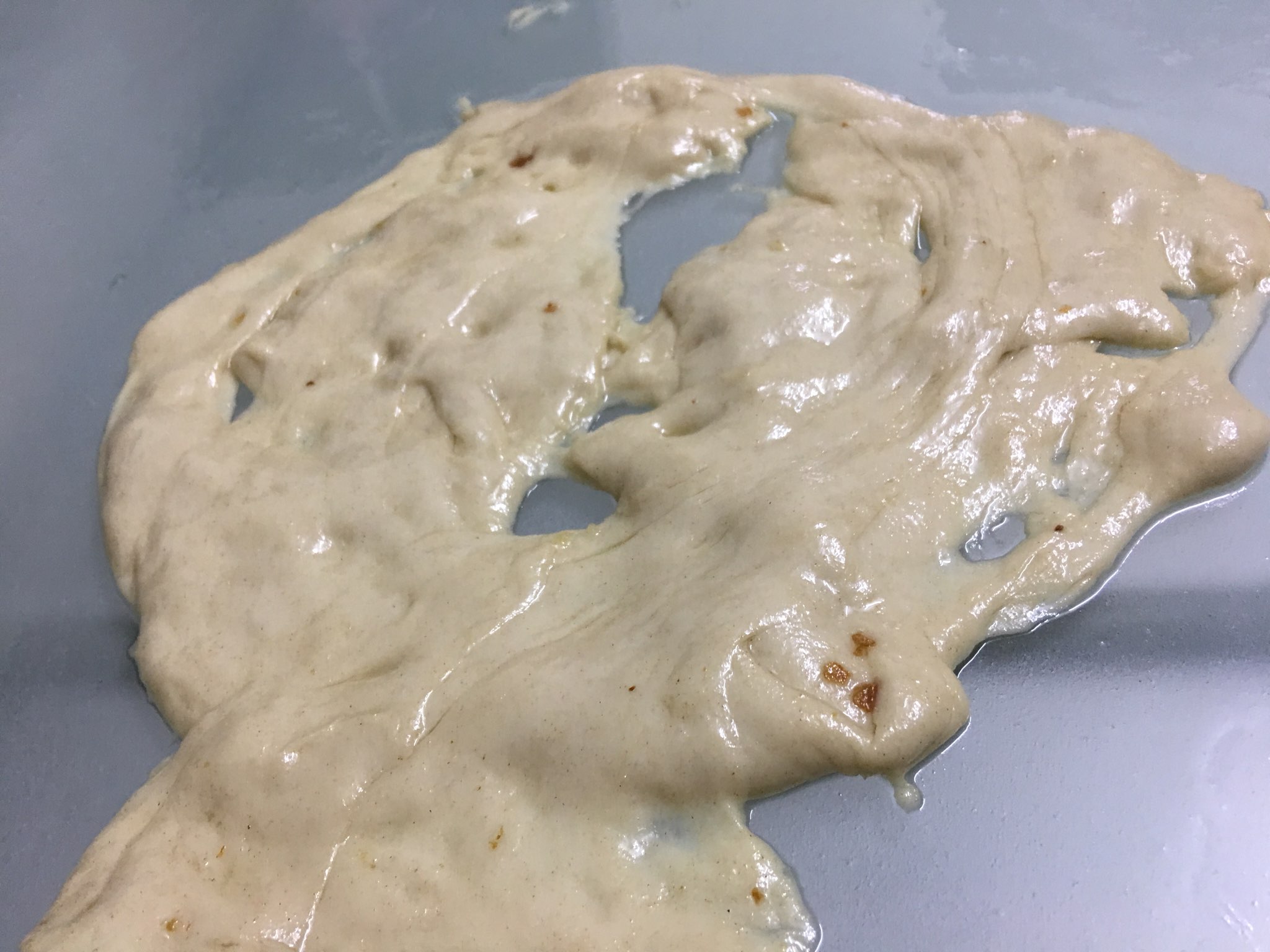 Mamak restaurants usually prepare the roti canai dough in bulk one day before. Not only does it helps to save time, there are reasons why the dough is left to rest overnight. Dough which is left overnight will ferment slowly to develop its flavour.

Furthermore, this process helps to relax the gluten which contributes to its stretchability. This is extremely important because that's exactly the effect we want in order to create those thin layers in the roti canai.

At the very least, it should be left to rest for a minimum of 40 minutes if you are rushing for time.

How to serve roti canai?

Roti canai is delicious even if eaten plain just as it is. Usually, freshly made roti canai is served with curry dhal or fish and chicken curry. Sometimes, it is also eaten dipped with sugar. Have it with a glass )of teh tarik or your favourite cup of beverage for a satisfying meal.

Divide dough into 6 small balls. Coat each dough with oil and place them on an oiled plate. Pour oil over the dough. Let dough rest overnight.

Flatten dough and flip it several times until it expands. Lift the left side of the expanded dough and fold to the right covering 2/3 of the whole surface. Do the same with the right.

Pinch the tip of the dough and gently pull the dough off the working surface. Swirl dough to form a circle and press gently.

Sprinkle some oil on the dough before letting the dough rest for 3-5 minutes. Flatten dough once more. Place it on a pan heated at medium heat.

Once roti canai lightly browns or is crispy, remove from pan and give it a light ‘clap’. Serve with curry, dhal, sugar or enjoy it plain.

I had to double the flour both times i made this. The end product was perfect with twice as much flour.