Soy sauce, a salty condiment is made through the fermentation of soybeans. It is used in dishes for its flavour and sometimes, colour. There are many ways to enjoy soy sauce. Countries like Indonesia, Malaysia and Thailand produced their own variety of soy sauces.

Soy sauce is a salty and savoury condiment made of fermented beans (Glycine max L.). Soy sauce has quite a long history according to William Shurtleff and Akiko Aoyagi in their book History of Soy Sauce which recorded that it started from the third century in China and later spread across Asia’s mainland. It is known with different names such as chiang-yu in China, shoyu in Japan, kan jang in Korea and later in Indonesia as kecap.

Four main ingredients in the production of soy sauce consists of beans, wheat, salt and water. There are mainly four kinds of soy sauce in the Southeast Asian region namely light soy sauce, dark soy sauce, sweet soy sauce and caramelized soy sauce. Each of these sauces has different characteristics. Light soy sauce has a light colour (brownish red), watery texture and a mix of salty and sweet taste. It is widely used in Asian’s dishes be it sauteed, steamed and even soups. Besides, it is also used in sauces. 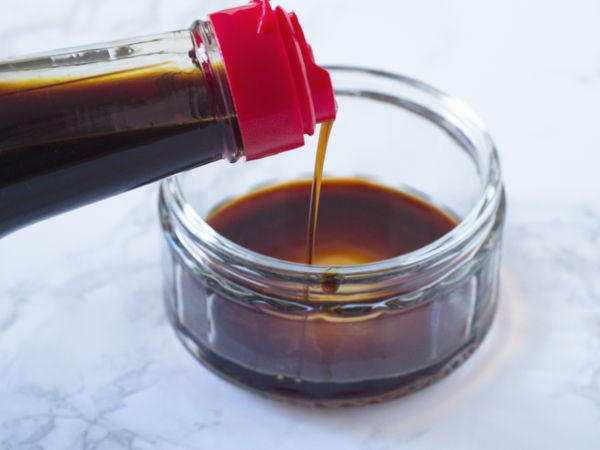 The making of light soy sauce mainly consists of two main steps which are mold fermentation and salt fermentation. Mold fermentation is carried out for one week. During the process, soy beans are washed and soaked for 12 – 15 hours, steamed, drained, and cooled. After that, wheat or barley flour which has been roasted and koji powder (Aspergillus oryzae) are added to the soy beans. The mixture of the soy beans, starches from the flour and koji powder is known as koji. Then, koji obtained from the fermentation will be mixed with salt water with a concentration of 20% and fermented for at least one week or up to six months. The result of this fermentation is named moromi. In this step, various flavour components will be produced due to the presence of lactic acid bacteria during the fermentation. The final step of making light soy sauce is ripening and pasteurization to increase the storage shelf life.

Fermentation time (aging) determines the quality of the soy sauce produced. The longer the soy sauce aged, the better the flavour because it is enriched with flavour components. Enzymes will degrade proteins, polysaccharides, dissolving sugars and turning into lots of flavour compounds. Historically, the aging process takes about one year to produce soy sauce in the best condition. However, manufacturers of soy sauces modified the process with sophisticated technology to adjust the temperature and time used during manufacturing which allows them to make commercial soy sauce efficiently that only takes around six months.

Soy sauce is known for containing plenty of proteins, amino acid and nutritional compounds which is good for health and the body. Soy sauce contains many kinds of essential amino acids, such as Valine, Tryptophan, Lysine and Histidine. These amino acids are able to effectively stimulate net muscle protein balance and decrease liver damage. Vitamin is also contained in soy sauce especially B6 vitamin which could help our body to build protein, make antibodies and hormones, and keeping the nerve system stabilised.

Some studies show that soy sauce contains lots of antioxidants (isoflavones), such as daidzein, genistein, and bioactive substances which greatly benefits the health in reducing the risks on some chronic diseases. Other health benefits from soy sauce are alleviating digestion system, escalating absorption of iron, reducing allergy risks, and preserve intestinal activity because the sugar content in soy sauce has a prebiotic effect to the probiotic bacteria in the intestine.

However, due to salt being one of the main ingredients and light soy sauce uses a high concentration of salt in its manufacturing, it has the highest sodium and potassium content compared to other kinds of soy sauce. Consumption in excessive amounts will not be good for the body, thus the intake of soy sauce should be taken in moderation especially for people with hypertension.

Size: If you do not cook often using light soy sauce, choose a small bottle or package when buying so that the flavour components are still intact even for long shelf life.

Ingredients: In addition, when buying soy sauce, pay attention to the packaging label carefully. Make sure the product is not made from GMO soybeans, that the preservatives used are safe (a few examples of acceptable and safe preservatives are acetic acid and sodium benzoate), and certification from certain institutions such as Halal Certificate for Muslim consumers and certificates issued by the food regulatory institutions to ensure that the product is safe for consumption.

Allergy: Furthermore, those with gluten intolerance or allergic to wheat can choose soy sauce with the gluten-free label which usually states that it is made using rice or corn starch. If you are not sure if the product is gluten-free or not, liquid amino or tamari soy sauce can be used as an alternative because it is usually made without using wheat flour.

Quality: Best quality soy sauce cannot be determined just by glancing at its colour. However, it is recommended to use soy sauce which doesn’t contain artificial colouring. Soy sauce's natural colour comes from the fermentation process. The colouring formation occurred around 2 – 3 months of ageing. Glucose and other sugars react with amino acids and form melanoidin pigment creating the unique colour of soy.

Soy sauce should be stored in a dark and tightly closed container and not be exposed to direct sunlight or heat. The best storage time for soy sauce is 3-6 months after opening. After 6 months, it is still safe for consumption although its flavour will slowly be reduced.

How to Use or Prepare

Without heating: Soy sauce can be used just like salt. It can be added directly to dishes to make it saltier. Otherwise, soy sauce can be mixed with other ingredients such as chillies, scallions or rice wine to create a dip.

Heating: Soy sauce is also used as a marinade, glaze or even added to gravy (e.g. in stir-fry or stew) for its flavour and colour.